I went to the show to hear live examples of Chinese celebration music and watch how music is used to enhance dancing.

The Chinese show was split into 2 sections, the pre-show, which was more informal and ran alongside workshops for children, and the show itself.

The pre-show, as I said above was informal and free for cost. The were several workshops running alongside, including writing Chinese characters, practising using Chopsticks, and symmetrical paper cutting. The acts in the show tended to be dance or song.

The show itself was more formal, taking place in the main room of the Town Hall. There were multiple acts, kind of like a circus and most of them included acrobatics or dancing. In between each act they told us a bit about the days of the Chinese New Year celebration. The music was a mix between traditional and modern.

Of the two shows, I liked the main show best. The acts were amazing and I was impressed with how even when it went wrong the other artist compensated for it. My favorite act was Body Sculpture because of the great contortion the men did. At the shows I heard more examples of the music and I will use those to make ideas for my composition.

Overall, I enjoyed the experience because it showed me cultural dances and music that I otherwise wouldn’t have experienced first-hand. 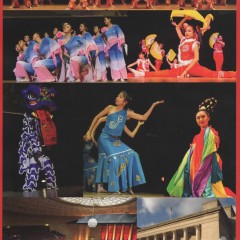 I went to the show to hear live examples of Chinese celebration music and watch how music is used to enhance dancing.