A fantastic display of ridiculous talent

A line-up of award-winning ‘allstars’ make up the cast of this incredible urban circus, who show off their vast array of skills from breakdance to basketball tricks, Roue Cyr (the big wheel) to BMX. With live music created by Roman MC and musician Gene Peterson, the performers wowed

Each performer had a chance to show off their skills alone on stage, and my favourite was Rhys Miller with the Roue Cyr wheel. It is completely mesmerising; I couldn’t take my eyes off it, marvelling at Miller’s strength and control. There was less frantic energy to that performance than the others, but it is engaging in a more hypnotic way. I also loved the two break dancers, B-Boy Sette and B-Boy Leerok, who had a video game style contest in which both got to show off their unique talents in funny and charismatic ways.

BMX Flatlander Peter Sore’s solo built well, moving from seemingly simple tricks to incredible stunts, combining unbelievable balance and serious courage. Basketball Man Rashaun Daniels began his solo with just one basketball, and performed more and more stunning feats of juggling and spinning as more balls were added in one by one, until he was dribbling a total of five simultaneously.

Peterson’s drum solo was impressive, and was accompanied by some brilliant coloured lighting effects that added a visual element to the performance. Roman MC's four minute performance showcased his rapping skills through a mixture of script and freestyle. Unfortunately, the music was far too loud to hear any of the words, so, as a result, I don't actually know if he was any good or not. It sounded like he was, but I was unable to really appreciate his talent, which was a real shame.

I really liked that each of them got their own time to showcase their specific talent, and then they all performed together, proving that life really isn’t fair as every single one of them could do at least one of the others’ talents as well! Sore joined Miller to perform a double Cyr wheel act which was amazing, while both B-Boys danced with basketballs and Daniels started breakdancing.

Each stunt was more impressive than the last, with the performers seeming to defy the laws of physics with the impossible feats they pulled off. There was also a nice touch of comedy, which engaged the audience more with the performers themselves. The lighting effects were brilliant; I particularly loved the clever concept of the spotlight on the Cyr wheel. It was a great show, featuring incredible talent, and it was such fun to watch. 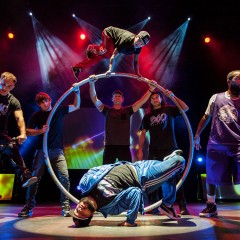 A fantastic display of ridiculous talent