A fun, playful dance through the city

Guru Dudu arrives in his signature bright orange lycra and hands out headphones to the small waiting crowd. We start with some old school disco-yoga right in the middle of Rundle Mall, the Guru standing on a bench to lead the moves. Then, to get to know each other a little better, each person performs a short dance that the rest of the group copy, which is hilarious, and heaps of fun.

As we move down Rundle Mall towards Gluttony we stop in different spaces to mime cleaning passersby to the tune of ‘Car Wash’, have a catwalk outside of a clothes shop, and mimic dog walkers and families that walk by. We imitate ballerinas on music boxes and clap along to the music, and with a few sets of spare headphones we invite strangers to join our party for a minute or two. Some of the music was slightly too old school for me, and there were a few songs I didn’t know, but those I did were classics - KC and the Sunshine Band, Justin Timberlake and the Jackson 5 all featured.

Each song went on a bit too long, so the actions we were given for each tune became slightly stale by the end. I think the energy would be better maintained by playing only a short bit of each song, say a verse and a chorus, and then moving onto the next one - that way, they could fit many more songs in, and none of them would get dull. For me, the most enjoyable part was seeing other people’s reactions who weren’t on the tour; it must be a bizarre sight!

Guru Dudu provides a fun and unique way to spend 50 minutes, and the more you throw yourself into it, the more you’ll enjoy it. 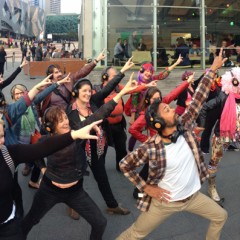 A fun, playful dance through the city