A beautiful, heart-wrenching portrayal of an incredible story

Ingrid Garner brings to life her grandmother’s award-winning memoir in this play about her late childhood growing up in Nazi Berlin. Having moved there for her father’s job, Eleanor’s family suddenly found themselves stuck in Germany as war was declared across the world, and their lives were changed forever.

Garner’s performance is stunning, from the depiction of her nine-year-old grandmother’s naive optimism to her flawless transitions between the characters of her parents and brother. The seven years of her grandmother’s memoir are cleverly woven into the hour long show; every moment is a crucial one in Eleanor’s life. Parts of the play are very telling: Eleanor’s desperate need to fit in with her new peers at the age of 10 leads her to ask her mother if she can join the Hitler Youth, even though, as an American citizen, she is exempt from the compulsory enrolment imposed on German children, because all of her friends have joined and she feels left out. This is devastatingly sad (and very revealing when it comes to the question of Hitler’s power), and yet you cannot judge her, because everyone can understand the desire to be accepted.

Garner continues to make Eleanor relatable throughout the show, mentioning her excitement at her first period and showing how she clings onto her childhood for as long as possible before the bombing of her street brings it to an abrupt end. The play is a heavy one, and images of Nazi Berlin and sounds of bombing drive home the very real nature of the story being told. And yet, Garner brings moments of lightness, which never feel out of place, and remind you that, throughout everything she endured, Eleanor was still a young girl.

The set is simple - two chairs and a trunk - but is used to its full extent by Garner, particularly in her use of it to build the cellar where they hide from air raids. Lighting effects are sparse, but well used, with a red wash proving particularly effectively during a very harrowing and emotional scene when a Russian soldier tries to rape her. Some of the stories Garner tells are, like many war stories, devastating, shocking and appalling, but there are also those moments of lightness which lift it, and make it more realistic. And Garner, as Eleanor’s real-life granddaughter, brings even more truth and significance to the play, driving home the fact that every moment was one that really happened.

This is a stunning piece of theatre, and not one to be missed.

You should also check out the interview we had with Ingrid Garner! 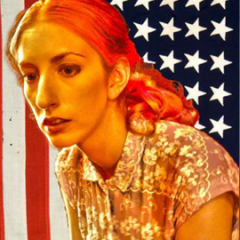 A beautiful, heart-wrenching portrayal of an incredible story