I have to admire her honesty. At no point does she apologise for any of the things she has done, and nor should she - it’s her life, and hers to share if she wants to. Despite what she says she is actually quite self-aware, at least about her past self, and she’s filled with this mad energy that easily fills the room. She dealt well with what was a rather unreceptive audience, and I found her funny, albeit rarely laugh-out-loud funny.

Towards the end of the show, however, the narrative took a much more sinister turn regarding her relationship with her drug dealer in Taiwan, and the mood became very, very serious. I think this was, in part, due to the effect the story had on a member of the audience, who was clearly deeply affected and began crying; Conway was somewhat shaken by this and the jokes that came at the end to lighten the mood felt a little out of place as a result. I don’t think she ever intended for the show to get quite that dark, however, and it was more the audience member’s reaction that changed the tone so drastically.

The show is a slightly crazy emotional rollercoaster which left me reeling by the end, but it was enjoyable, and Conway has a certain charm that can be hard to find. 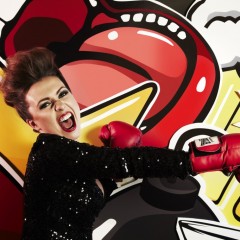