I don’t know if I have strong enough words to explain how much I loved Orpheus. It stars two guys, walking around and through an audience sat in traverse, one playing the guitar and singing, the other narrating. The story is of Orpheus and Eurydice, half-modernised and retold as Dave and Eurydice, who meet in a club and dance in the dark to Bruce Springsteen. Eurydice brings colour to Dave’s life, and the Olympian gods themselves mourn her death and Dave’s devastating loss, and send him to the Underworld to get her back.

The singing and narration were interwoven flawlessly, with the gentle strumming of the guitar beautifully underlying almost every moment of the show. Vince, the narrator, holds a book, from which he reads the words he speaks, although not often, as he knows most of it by heart! I was wrong to wonder at first if the book was an aid because he simply didn't know the words; this is a story, and one that it feels right for him to read. It’s more natural and endearing, more colloquial and approachable, and it works perfectly. The mixture of poetry and normal speech is beautifully balanced and Vince delivers both in an engaging and emotive way.

Phil, who plays the guitar, has one of those gorgeous, slightly raspy voices that could easily lull you into a peaceful sleep, but can also hit stunning, powerful notes that make you sit up and realise just how talented he is. His original music is beautiful, and, much like in the works of Homer and Ovid, there are motifs woven throughout the show, in both the music and the poetry, that maintain a connection to the original Greek tragedy.

It’s a simple show, a personal show, in which the audience are intimately involved, singing along to Phil’s original songs (as well as the more widely known Springsteen) and feeling their hearts soar and break with Dave’s as he finds and then loses his Eurydice. But even when I was aching for Dave and his tragedy, I couldn’t keep the smile off my face; this kind of show is the reason why I love the Fringe so much. I have a friend with me in Adelaide who has never been to a Fringe before, and I am so glad she got to see this show, and experience one of the real diamonds that make these festivals so brilliant. I adored Orpheus, and if you don’t go and see it, you’re missing out. And don’t worry, if you’re not in Adelaide, it’s coming to London in March! 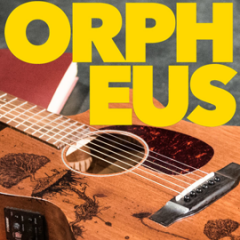