Told by An Idiot present an absurdly comic take on alternative history, questioning what it means to lose a powerful identity and attempt to retrieve it.

What if military leader and tyrant Napoleon hadn’t died on the remote island of St Helen? What if he had escaped with the aid of a doppelganger? What if, on a tangent from his quest for continental power and domination, he had aided in setting up the most successful melon business in Paris? Told by an Idiot ask all these questions and more in the company’s latest production ‘Napoleon Disrobed’. Based on Simon Leys comedic novella ‘The Death of Napoleon’, this production is a hilarious and fast-paced reimagining of Napoleon’s final years after exile, as well as what it means to lose and try and retrieve great power.

The concept of alternative history is hugely enticing, and the small, two-person company quickly heightens the absurdity of the plot with its persistently silly  and sardonic humour. Paul Hunter, as Napoleon, burns a miniature British flag as the climax to his monologue detailing his desire to retrieve power, marking this poignant image with a mock-whisper and jazz hands “ooh controversial!” It is these moments of both poignancy and sarcasm that gives the production its uniquely comedic flair, and forces us to recognise that neither us, or the characters involved on stage, should take themselves too seriously. It's a tone which certainly aids the heavier themes of Napoleon’s identity crisis, as the doppelganger he abandoned in St Helen dies, leaving him to be forced into the world of mundane and powerless reality.

Whilst the play’s comedic dialogue and events are highly refreshing, there are moments when the desire to elevate the absurd can overshadow the initial premise. The opening University Challenge sketch manages to successfully establish the light-hearted tone of the play through audience participation, but doesn’t seem to serve much other relevant use. Similarly, there are moments which seem to meander or delay from the real purpose of the plot; an elongated game of panpon between Napoleon and his host, Ostrich, doesn’t truly further their relationships dynamic and only seems to build on the silliness of the production. All these scenes are still entertaining, but it does leave disappointing moments where we feel like we’ve lost our way in Napoleon’s story.

Kathryn Hunter engages minimalism within this production, using a limited range of props and costumes, and utilizing multi-roling in her two-person cast to a tremendous success. Paul Hunter’s Napoleon is highly sardonic and manages to encapsulate the comedy, and tragedy, of his character’s absurd quest to retrieve a lost power and sense of identity. Ayesha Antoine also excels in multi-roling as the various supporting characters, conveying a deeply expressive physicality which adds to the comedic value of all her roles throughout the performance. Michael Vale’s set design is also minimal, despite being highly innovative and taking various forms throughout the production. The square wooden traverse transforms from the claustrophobic prison of St Helen, to a rocking ship, to the sloping hills of Antwerp. The stage’s continuously changing form underlines the absurdism of Napoleon’s journey, as he is transported from one meandering path of self-discovering to another.

Whilst this play does have disappointing moments which seem to divert from the original concept, overall this is a hugely witty and sardonic production which captures the absurdity of trying to retrieve a power and identity which has ultimately been lost, and the process of self-discovery which accompanies that.

NB: This review was of a preview showing of ‘Napoleon Disrobed’. 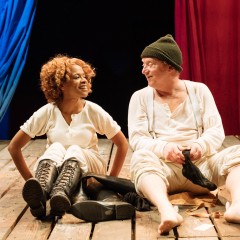 Told by An Idiot present an absurdly comic take on alternative history, questioning what it means to lose a powerful identity and attempt to retrieve it.