Kendrick Lamar produces an album that brings together the up-and-comers in contemporary American and African Black music and celebrates Blackness by making you move.

No one but Lamar appears on a track on their own. Despite ‘I Am’ being by Jorja Smith, ‘Paramedic!’ by SOB X RBE and the ‘Redemption Interlude’ by Zacari, Lamar’s vocals appear on all of them. He takes track one, ‘Black Panther’ for himself in which he launches into two intense minutes of flat piano and all kinds of bass on the kingliness of Black men ending with “I am T’Challa,” the name of the Black Panther himself. Lamar has credits on only five tracks.

Beside Lamar, the only repeat appearances come from Zacari and James Blake - both collaborators on Lamar’s 2017 album, DAMN.

The hip-hop and RnB album touches heavily on themes of Black Panther’s plot, but not entirely. There are love songs, too in the first hit single from the album ‘All The Stars’ with SZA, ‘The Ways’ and ‘I Am’. But those that do touch on war, family and race do so in unexpected ways. Of course there are more intense hip-hop ciphers that force you to furrow your brow in perplexity like the NWA-influenced ‘Bloody Waters’ but there are also dance floor anthems that do the same, contributing to its endearment – personal favourite, bass-heavy (and I mean heavy) ‘Opps’ with Vince Staples and Yugen Blakrok being chief.

Every single song kills and offers something new. With Lamar featuring so heavily there was a risk of Black Panther OST becoming something scarcely different to DAMN but there is an enormous amount of creativity in the conception of this album. Perhaps the rein and budget given by Marvel and Black Panther director Ryan Coogler enabled Lamar to be the child in the studio that he’s always wanted to be.

Hearteningly, Lamar takes the flavour outside the US, bringing tasteful influences from afrobeats, dancehall and various traditional African styles of music with plenty of percussion and vocal noisemaking. Despite becoming conscripted into the Marvel Cinematic Universe, he is far from a cog in the machine – as much experimentation is afforded here as he would on his own.

The artists involved and the video for ‘All The Stars’ take this further. Many artists are from South Africa: Sjava, Reason, Yugen Blakrok, Saudi and Babes Wodumo hailing from there sprinkle magical beats, kinetic pace, and Zulu singing across ‘Redemption’ and a soothing hat tip to turn-of-the-millennium hip-hop in ‘Seasons’. A choral filler on closer ‘Pray For Me’ by The Weeknd also resembles this vibe. Learning from them, Kendrick manages to inject it throughout.

The astonishing All The Stars video, championing the Black feminine, takes the story across Africa by channelling cultures from Ghana, the Congo, Liberia and elsewhere. In so doing, Lamar throws some much-needed attention to African talent who bring realism to the Wakandan soundtrack.

We cannot skirt over the politics of it all though, can we? Black Panther’s release is incredibly timely; attaching Kendrick Lamar is the best and only logical move, being known for how woke his lyrics are. There are apt and unapologetic political treatments of race relations on ‘Black Panther’ (“What do you stand for?/Are you an activist?”) and ‘Pray For Me’ (“Mass destruction and mass corruption/The souls are sufferin' men/Clutchin' on deaf ears again, rapture is comin'”) but mostly in the second half of ‘King’s Dead’ with Jay Rock, Future and James Blake. It’s one for the club as well as to mull over alone and is visceral and explicit. Listening to Future in falsetto is jarring and uncomfortable but that’s probably symbolic.

Going back to ‘Pray For Me’, the more commercial track signifies the furthest diversion in an album that is, quite rightly, difficult to pin down. Irritatingly, it sounds much more like a The Weeknd song than anything; a pop and RnB-straddling style that doesn’t sit well surrounded by the company in which it finds itself.

I haven’t felt such unanimous enjoyment from an album since, coincidentally, Lamar’s 2015 To Pimp A Butterfly. By this I mean no album whose every single track I’ve enjoyed singularly and as part of the greater product. As this soundtrack is a product even greater than the sum of its parts in the album and film, this makes the achievement an immense one. 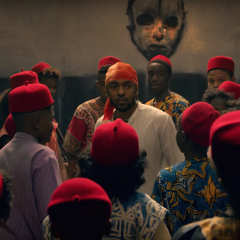 Black Panther The Album: Music From and Inspired By

Kendrick Lamar produces an album that brings together the up-and-comers in contemporary American and African Black music and celebrates Blackness by making you move.