“Hi, I’m Holly and I babysit grown men, a therapist in thigh highs’

The text message, “We need to have a chat…” could instill a relentless level of fear in anyone. But imagine being a sex worker with a Brazilian-Catholic Mum. You’d need a full 90 minute show to express that fear. Joana Nastari has kindly volunteered as tribute with her one-woman show ‘Fuck You, Pay Me’.

Nastari places being judged yet not being judgmental at the heart of this piece; which tilts like a see-saw between the confessional and the dramatic. Likewise, the identity of each sex worker tilts like a see-saw too; between the mask and what lies beneath. Nastari adds, ‘We need to see protagonists who are a sex workers, but who aren’t defined by their job, we get to see them rich with human experience, with their work as merely one aspect in the web of who they are.’ Metaphors to sorcerous ‘witches’ are envisioned, heightening the ancient view that sex workers are still viewed as carnal societal outcasts.

Strutting in her sky-high, glittery high-heels (adorned with fairy lights no less) on to the stage into the barrel vault of the Pit theatre, pink fur coat and nipple tassels in tow – being publically judged is clearly not Nastari’s problem. Furthermore, she welcomes an audience with a list of sexist, abusive terms (my favourite being ‘Welcome Semen Demons!’) before reading her own subverted 10 commandments, ‘Thou shalt not slap, bite or tickle’ in a refreshing manner.

Joana Nastari handles the spoken word impeccably. Allusions to Kate Tempest can be drawn through her work, and her rich, seamless fountains of prose are brought to life by Nastari’s protagonist. She mesmerizingly conjures up vivid imagery which I felt like I could almost taste both with my mouth and eyes. Almost journeying into the visual hallucinations experienced through the ecstasy of performance and the ecstasy consumed in the strip club Nastari works in.

For a one-woman show, Nastari is at home on the stage. She effortlessly represents characters met through her travels, dancing, knocking back shots, and letting loose in her natural habitat. Her energy level is superb and I can’t help but feel inspired by her stage presence and power. She gives her all right until her dance routine at the very end, so punters in the audience are definitely in for a surprise… Credit is also due to lighting designer Martha Godfrey for transforming the atmosphere from its glamorous highs to grimy lows.

Overall, the only thing I would have tweaked slightly within this performance is Nastari’s awkward start when not in character. However, I think one performer to another can respect that she was purely ‘warming up’. But, I am very glad I was in the audience and cannot wait to see what happens next, from Nastari and in terms of the exploration of prostitution. 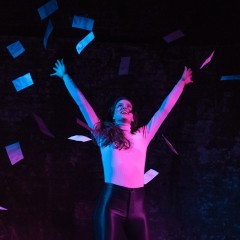 “Hi, I’m Holly and I babysit grown men, a therapist in thigh highs’