An adamant, self-assured white mansplainer incarnate (PJ Stanley) utters this line to his female friend Nicole Acquah. Remaining unperturbed, she patiently flicks through her magazine awaiting a moment to make him realise what he has said.

Partly autobiographical and partly verbatim, ‘For a Black Girl’ is an excitingly caustic exploration of everyday sexism and racism in the UK. Two actors impressively cover over 60 characters in various vignettes, with an engagingly expressive quality. Through courtroom trials, school common rooms, job interviews and supermarkets – it seems no stone is left unturned in where racism or sexism could strike.

Could this be overwhelming? Possibly. However; with a mix of monologues, interview recordings, poetry and TV commercials- the piece is delivered with ease. There wasn’t a point where the piece felt unclear. Frankly, the amount of scope they covered reflects how mainstream these issues really are. In fact, it could be argued that the show is barely scratching the surface of the shameless volume of oppression faced every day.

What benefitted this show was its use of an all-female movement ensemble. At times, they did feel slightly unnecessary, but for the most part they symbolise a meta-concept, bubbling beneath the material. Female and voiceless, they remained silent as the male protagonist still managed to indifferently ignore female concerns. With the more harrowing scenes, they increased the tension drastically, with multiple women repeating the same awkward gestures as they sat in a courtoom due to a rape case. Unsettling and uncomfortable, the visual ripple of this device is very powerful to watch on stage. Despite the fact that five female bodies are on stage, the man still stands very confidently as he retains power.

As a new piece of writing from Acquah, it’s clear that the focus is on being blunt and honest. The play achieves just that, but still retains lively humour to keep its audience’s attention. With regards to delivery, there is a consistent rhythm which does pervade the piece. This rhythm does make the play feel fairly rehearsed and could feel more live and in the moment.

Nevertheless, ‘For A Black Girl’ is a story which needs to be heard and what better place for this than the Vaults Festival, London’s biggest arts festival?

Interested in producing your own show? How about reading this helpful guide for inspiration? 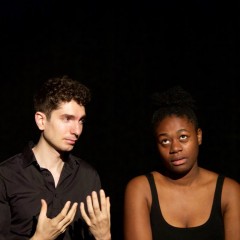