A musical that has been stunningly reimagined on stage for over 20 years.

A Unique Vision on Stage

Has the Disney classic retained its power after so many years? Judging The Lion King against the new age of West End talent, namely Lin-Manuel Miranda’s hip-hop breakthrough, Hamilton, I was worried it wouldn’t be a strong counterpart to the award-winning Disney ‘renaissance’ film. But, as befits a timeless Disney musical, it did stun me for its beautiful artistry and the theatricality of its choreography. In fact, the musical score embraced the evocative sounds of Southern Africa. It hasn’t lost its magic in theatre.

The narrative, however, was bordering on abstract, almost lost in translation from the animated classic. The plot, was at best, cursory in comparison to the visual brilliance of Julie Taymor’s production. But, at its heart was the Shakespearean-inspired story of Simba and his journey from an excitable lion cub to his inherited role as King of the Pridelands. This was well balanced with lovable characters and a fine display of colour and stunning theatrical effects. Nothing could quite match the grand staging of animals parading through the Lyceum aisles in the opening sequence of the ‘Circle of Life’. 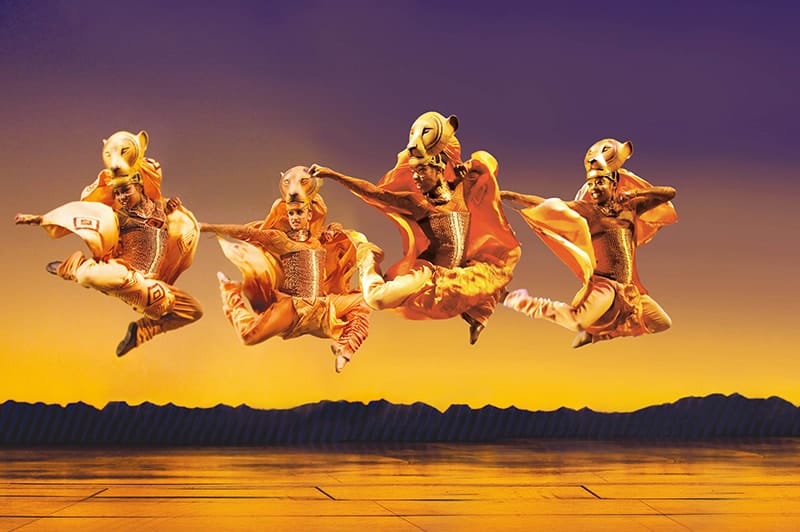 The natural animal habitat markings of a vast African savannah were depicted in a gorgeous and intricately designed stage space. Light and colour were also viscerally connected. The stage responded to the emotional intensity of music, the rising of a luminous morning sun and the sensitive internal world of Simba’s subconscious. The Lion King was majestic both for its scenic design and use of kaleidoscopic colour and light. Most memorable, perhaps, was the expressionistic choreography of Garth Fagan. There was a stunning intensity to the ‘Circle of Life’ ensemble and tragic wildebeest stampede. The story was captured in an elaborate cultural dance of prancing lions in geometric and vibrantly adorned costume. Every character was whimsical and stunning, moving with the grace of Balinese dancers and passion of a Maasai warrior.

Julie Taymor and Michael Currey maintained the absolute reality of the characters with leonine masks, hollow puppet forms and vibrantly contoured makeup. Rather than fully adopting the animal form like in Andrew Lloyd Webber’s Cats The Musical, the use of puppets, masks and the makeup of Michael Ward captured the vibrant spirit of Africa. The textured face paint itself was theatrical, all faces gloriously coloured, each one authentic and unique. The puppeteers were not hidden from the audience. Rather, they represented a world where man and animal coexist. The puppets, some manoeuvred by hand, others with mechanical contraptions, were lauded pieces of art.

Similarly, the makeup, reminiscent of traditional Maasai warriors and the Romans, was a decorative and symbolic design tool that conveyed the distinct personalities of each character. It became misshapen, parodically dangerous and distorted to portray the malevolence of Scar and distinctly colourful to represent Rafiki, the sage mandrill baboon.

The Rhythms of the Pridelands

Although the vocals of young Simba (Hugo Max Woodhouse) and Nala (Tia Murrell) were not as strong as their film predecessors, I was completely overwhelmed by the celebration of South African percussion and orchestration from Lebo M and composer Hans Zimmer. The sounds of Africa, at its best in the ‘Circle of Life’, ‘They Live in You’ and ‘Shadowland’, were very much inspired by the chants of six African languages and African choral styles of singing.

Among the charming young lion cubs, excitable hyenas, the comedic duo/Timon (Richard Frame) and Pumbaa (Keith Bookman) and majordomo/Zazu (Gary Jordan), Janique Charles really stood out for her unmatched and deeply moving performance as Nala in ‘Shadowland’. She made for a wonderful Nala, her movements fluid and her voice as gorgeous as the scenic display. Rafiki (Brown Lindiwe Mkhize) and Mufasa (Shaun Escoffery) also brought the music and lyrics of Elton John and Tim Rice to a level that was inhumanly passionate. Brown took the persona of the unusual baboon with earnest intent, outperforming even George Asprey’s interpretation of the sinister Scar, with her spiritual wisdom and quick wit.

It was an altogether dazzling show, superior in many ways to the late animated film. Years after the London opening in 1999, it has still maintained its visual majesty and success. Taymor’s brilliant vision offers us a memorable musical drama, capable of reducing its audience to a state of jaw-slackening awe. The stunning spectacle will, without a doubt, inspire its young audiences for years to come. 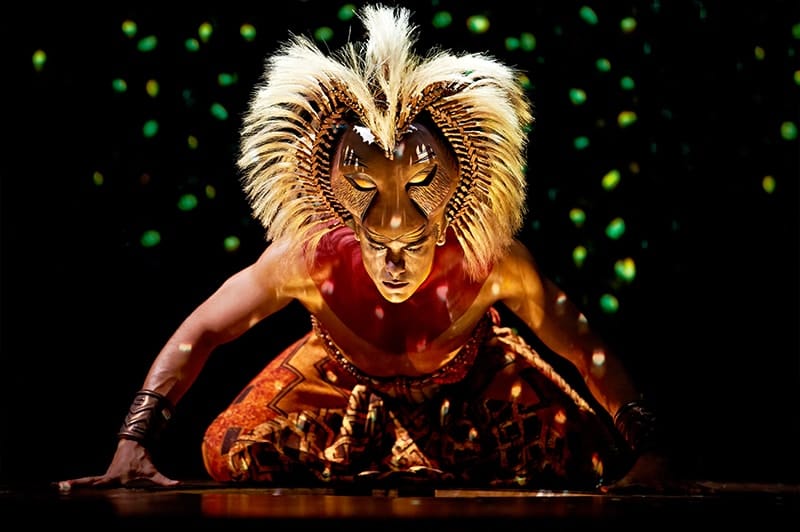 Find out more about the shows at the Lyceum Theatre here. 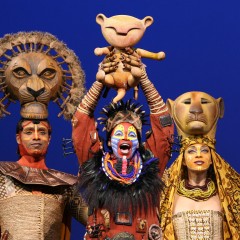 The Lion King at Lyceum Theatre

A musical that has been stunningly reimagined on stage for over 20 years.