'I'm not falling, I'm just trying not to shatter'

'Artificial' is an exposingly candid exploration of the human condition. Written, produced, directed and performed by Luke Culloty, Artificial is his first professional production within the London fringe world.

As seen through the eyes of our male, tragically unlucky-in-love protagonist Dominic, Artificial explores the truth behind the fairy-tale facade. He works day by day assigning artificially intelligent robots to deeply trusting families; in a post-dystopian style era, which in 2018, could be an imminent reality. Stuck in a reliant relationship with his own robot, Dominic's own defensiveless loneliness cycle is protruding. A 'curious' encounter dangles the opportunity to break the cycle... how does Dominic react?

For a first production, Artificial is clearly a terrific piece of theatre. Culloty has clearly played to the strength of his cast of youthsome actors, by casting them in roles which cultivate their raw, naturalistic energies.  Actors truly listened to their scene partners to really heighten the ambiance of the piece. Decoration was kept minimalistic, to capture the audience's attention on the acting at hand. Intricate lighting variations were in place to help shape the mood of the piece, but scene changes were not as silky caramel smooth as one would have preferred, with some changes feeling quite staccato during delicate dialogues.

Nervous energy can be a great thing, however the problem with this is that occasionally performances can appear unsettling or rickety. As the cast are youthsome I'm sure this won't be the be all and end all once the run is under their wing, however it can be fairly difficult for an audience member to truly absorb the narrative if the floor isn't consistently held. Considering this, Alexi Smith (Kub/Clive) has an awe-striking quality on stage, oozing both confidence and conviction effortlessly through his resonant voice. Edward Baxter's honest and vulnerable portrayal of Dominic was joyous to watch. He managed to maintain a true perspective on how men fight their own emotions with great sensitivity, and often to a non-existent scene partner. Of course, more is always merrier and so a little more playfulness with the rich tones in his voice could be on the cards in future.

Being on stage for the majority of the play is tough. Nonetheless, if the character is stilted in a serious situation, actors can reinstall energy through their vocal delivery, thus, spicing up scenes which are more heavy on text.

Raw, radical and risky, Artificial really is a mesmerising piece with many bends and curves to excite its audience. A few slight amendments here and there could and should be played with for future projects. However, I do think Split Note Productions have an excellent future infront of them and I'm sure we'll be hearing a lot more about them in the coming years.

Tickets are available to purchase here. 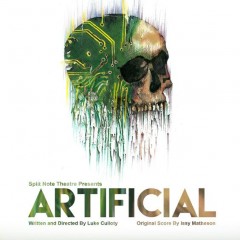 'I'm not falling, I'm just trying not to shatter'