The latest season of Stranger Things was released this October, and inarguably tops the last; the whole production has been ramped all the way up to Eleven.

Upon the release of the first season of Stranger Things, a global pandemic erupted wherein every third person you encountered would, at some point, mention the show. And that’s a conservative figure. With a reputation that legendary, the creators (The Duffer Brothers, as they’re credited on screen) had a lot of pressure regarding the success of the sequel. Being a huge admirer of the first season, I had some concerns that the second could fall victim to ‘sequel-itis’ (think Taken 2, Kingsman 2- you know the drill)- but the creators avoided any trace of this trope with their astounding, cinematically intensified sequent.

The first thing that begs attention is, of course, the amplification of the plot. If the first season was tense, this season turned it up all the way to eleven (pun certainly intended). The development of a supernatural, yet controllable, threat into an all-encompassing, globally catastrophic evil gave an atmosphere more foreboding than the first season- which is no mean feat.

The intensification of the plot naturally provided an opportunity to shed light on different actors- specifically Noah Schnapp as Will Byers. Whilst Will was, by all accounts, a main character of the first season, Schnapp’s acting capability was never truly showcased until now. He certainly delivers the most haunting performance of the season; his intensity is truly incredible, and frankly startling. Emerging as the standout actor of the season, it’s only all the more shocking when you consider his age (barely thirteen), height (barely five feet) and experience (barely notable pre-Stranger Things).

Another key facet of the season was the clear focus on developing relationships between characters, specifically Eleven with Hopper. Their relationship was particularly striking thanks to the nature of the actors themselves; with both (Millie Bobby Brown as Eleven, and David Harbour as Hopper) inclined to dominate a scene. Their shared storyline was intensely highly-charged, and gave insight into parts of each character which were previously unexplored. This is particularly apt in Hopper’s case; known as the tough guy, the classic American cop, this season played more on his fatherly side, which although already known to exist, was previously so elusive.

In a similar vein, Eleven’s storyline allowed for the progression of a far more emotional and human portrayal, polar to the detachment she was previously known for. The Duffer Brothers have since said in interview that the evolution of their relationship was one of their only solid leads for the season; driven by a curiosity into the dynamic of each actor, and how they might influence each other- which of course, even the creators could not control.

Another progression that I can’t help but mention is that of loveable token bad boy Steve Harrington, played by Joe Keery. Well, I say bad boy, but with new antagonist Billy in town, Steve’s tough facade takes a back seat as he begins to take interest in such activities as pining over Nancy, and practically adopting Dustin as a son of his own. His appearance was minimal, even forgettable, in the first season, but he’s emerged triumphantly as a new fan favourite after this pleasantly surprising character development. Again, the creators have said in interview that they had no intention of making Steve’s role as central as it turned out to be; instead, once they started filming, a complete 180 was pulled when they realised how well his self-induced development would fit with the plot.

Of course, the driving force behind the whole production is playing on nostalgia. This is what brings the show together, across genres and generations. Nostalgia from parents, longing for a bygone era. And, somehow, nostalgia from kids; longing for an era that was never theirs, but now may as well have been. Developing such a feeling of attachment to the show that they feel the same connection with these years that they never knew.

A huge part of eliciting such strong affinity from audiences is the score; drastically varied and perfectly fitted for each scene, so full of heart, and truly tangible effort. It adds so much tension, so much atmosphere, so much warmth and rhythm to each scene- synth and violin for the hold-your-breath moments, clean electronic video-game soundtrack for tracking shots and montages. Classic rock anthems and ballads, carefully chosen to innervate the audience for action, and a nod to the (plentitude of) older viewers.

One thing that translates from writing, to producing, right through to the viewer is the feeling that these stories have a life of their own. Whilst the writers have stayed true to the original series, keeping it as honest and natural as the viewers first loved, there is a growing sense that these concepts do not belong to them anymore. The creators themselves, as previously mentioned, had to adapt and mould the show throughout the entire process as a result of character developments they hadn’t prompted, or even anticipated. The actors are a factor, the fans are a factor, the nature of the plot itself is a factor. They collate to form a show that’s truly fluid, and warm, and alive- a glowing rarity in an age of bloodless Hollywood robotics.

So many things have made this show an instant classic, and the second season has only affirmed its well-earned status. The actors- not a single one brings the rest down, from the ensemble of truly remarkably talented kids, to the well-respected, seasoned acting veterans. From the heroes to the antagonists, to the side-plots and the plain fanservice (think the downright unnecessary, but largely appreciated, trick-or-treating montages). I sincerely believe that this is a show for everyone- so you’d better get started before season 3 is announced. 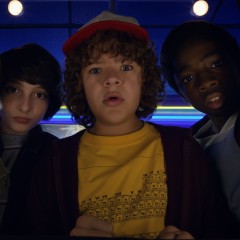 The latest season of Stranger Things was released this October, and inarguably tops the last; the whole production has been ramped all the way up to Eleven.