Voice MagReviewsKing Lear at the Min…

My review of King Lear at the Minerva Theatre, Chichester

In my opinion, 'King Lear' sits atop the pile of Shakespeare's play. It has relevance, power and a message about vulnerability in society. Even those who you perceive to have everything can struggle. It explores themes of patriotism, love, age, nepotism, justice, reconciliation, mind and ultimately death. It is a goliath of a play, and the title role of Lear requires acting muscle and intelligence to bring him to life. Alongside which, a cast must support his demands and react off of his steady demise into an unsound mind. Lear is the centre point of the play and in Jonathan Munby's production; it all becomes clear and vividly vulnerable. It is a raw perception of what Lear is. Ian Mckellen plays a coarse tempered king who is slowly turned to ash. He clearly shows his intentions and in mesmerising monologues, his mind struggling to cope with the power resting on his shoulder. He gives a performance that leaves the viewer feeling uneasy. How has this happened? Why has Lear gone from this powerful man who is greeted like a true king? With a fanfare and an exquisite reimagining of the National Anthem by the Ringham Brothers.

This whole production is slick. It flows without major interruption and scenes follow in quick succession. Even though it is long (around 3 hours plus interval…) it is over in a flash and leaves you reflecting on its contents. Mckellen is supported by a stellar cast. Sinéad Cusack (Kent) provides an astute female advisor to the king. The switch of gender here pulls this production into the 21st century. Johnathan Baily (Edgar) and Damien Molony play their brotherly rivalry well. Molony, sneaking around and backstabbing. The three sisters create juxtaposition to each other, each sister provides their own take on love and how they rebound to the Kings proclamations. Other characters fit in well to the overall style of the piece and each character has a role in its modern context.

My personal highlight of the play opposed to the acting was the contemporary setting. Munby drags King Lear into the modern locale. We see Lear as a Prince Phillip-esque stalwart, head of a modern powerful monarchy surrounded by his subjects and daughters dressed in Kate Middleton style dress and the luscious red attire of Burgundy and France. It sets a picture of modern conflict and pressures surrounding a 21st century royalty. In juxtaposition is the role of letters. Munby makes the decision to keep the convention of letters rather than modernising. Alongside the Silicon Valley of 2017 you can't help but think that a Facebook message instead of a letter would have saved a lot of headaches. But as an audience we have to adhere to this stylistic decision.

Quite simply, this production is beautiful. The rain in the storm scene is crude and the remainders of water on the floor means the following scenes revolve around people getting wet. It shows a metaphor for how Lear's madness is affecting everyone in this world. The set is simple and powerful. The music is pounding and leaves Goosebumps. Overall it is a brilliant production. 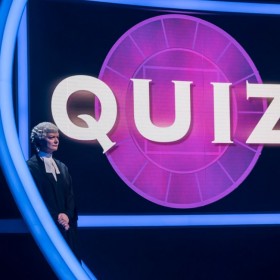 My name is Charlie Essex and I am currently working at Chichester Festival Theatre as the Education Apprentice and loving every second (so cliché).

I am currently working my way through an Arts Award Gold. 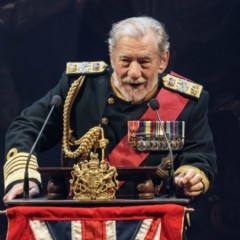 My review of King Lear at the Minerva Theatre, Chichester