Voice MagReviewsRound and Round the…

A review of the performance of Round and Round the Garden as part of the Norman Conquests Trilogy performed at Chichester Festival Theatre in September 2017.

Round and Round the Garden

Round and Round the Garden is the last play in Alan Ayckbourn's trilogy The Norman Conquest. Showing at Chichester Festival Theatre between 25th September and 28th October, they are a farcical look at the events over a summer weekend in a sleepy country house. The family has come back to roost, bringing their myriad of issues with them. An astoundingly strong cast gives this somewhat dated play a new lease of life, with Sarah Hadland as the wonderfully British, stiff-lipped Sarah, Jemima Rooper as Annie – the dowdy stay-at-home carer for their (never seen) mother – who suddenly becomes the subject of Norman's coquettish affection and Hattie Ladbury as Norman's blunt, short-sighted wife. The three make the trio of Norman's interests, as he begins by trying to take Annie away for a dirty weekend – in East Grinstead of all places! By the end of the trilogy he has somehow managed to convince Sarah he is the tonic for her feeling sweltered in suburbia and Ruth that he's worth staying married to. Trystan Gravelle's dulcet Welsh tones add a layer to Ayckbourn's dialogue that proves to make it more entertaining while highlighting the drive for everyone in the house – they all want to be loved. The other two men – Jonathan Broadbent as Reg and John Hollingworth as Tom, provide foils for Norman's various attempts at the women in the play. Broadbent portrays the very pinnacle of a middle class, suburban man, bound by the "ball and chain" of his domineering wife he has little say in anything that happens in his life and what little he does have to say is often shushed by Sarah. Hollingworth on the other hand is brilliant as the eternally dumbfounded Tom, constantly with his hands on his hips and an 'ummm' for every occasion, he knows exactly how to make things worse and is part of one of the most comical misunderstandings I have seen onstage for a long time.

A first for the Festival Theatre, the back row of seats has been taken out and reassembled into a set of terrace seating which sits in front of the scene dock on the stage, this completes the hexagon and makes the stage completely in the round. Astroturf is laid underfoot – including up to the chairs – giving one the impression that they are walking across this ramshackle garden where the events of the play take place. It has an aura of disrepair and even the pond features a discarded plastic duck lying sideways in the water. A swing is also hung from the roof which leads to a very comical moment with a drunk Norman. In the branches displayed overhead there also sits the cat that refuses to come down – scared perhaps of the madness only just contained by the dilapidated country house.

All in all, the characters fumble in their own very British way and while the play is a comedic farce with many a high point, the overwhelming feeling is sadness. Despite a whole weekend having passed, no resolve is found and all six carry on with their lives with little hope for such a notion as true love or actual happiness; in that the audience is left with perhaps merely a poignant look at ourselves. 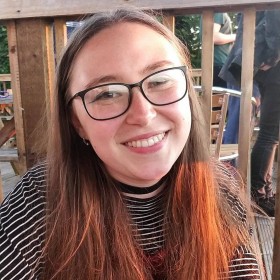 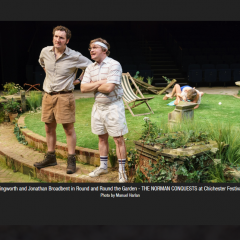 Round and Round the Garden at Chichester Festival Theatre

A review of the performance of Round and Round the Garden as part of the Norman Conquests Trilogy performed at Chichester Festival Theatre in September 2017.