An astonishing performance of physical theatre, dance and rhythm

Origins has been one of the wonderful surprises at the Fringe this year. Telling the story of Cain and Abel, the two performers explore this ancient tale and recreating atmospheres and emotions almost purely through gestures. While rhythmical tones mix with beautiful choreographies in a fast-paced sequence, a wide range of lights are employed to underline every single slow movement or change of expression.

It is incredibly beautiful to watch and it has a cathartic effect on the audience. It feels as if you living the intense emotions portrayed on stage, one leaves the show shaken but also lighter. The bodies of the performers adapt to give voice to different feelings. Cain is tormented by the ghosts of his past and he has a silent and destructive dialogue with them.

The stage is organised with a few basic elements that doesn't disturb the performance and give prominence to the acting. The actors show a significant ability to build stories out of nowhere. The lightest touch can give life to an impetuous murdering instinct as well as the purest expression of trust and intimacy.

I have found the show very original and impactful. It was effective in using the tools available (choreographies, sounds and lights) to tell the story. Every detail was curated, every movement coordinated, every sequence connected in the narrative. I strongly encourage the Animikii Theatre Company to keep being bold and brave in the way they experiment with their performances. Origins is a beautiful performance and it traps you in its haunted world, before letting you go at the end. If you are looking for something powerful and intimate at the same time, you know where to go.

Origins will be performed at ZOO venues until the 25th of August, 21st excluded. 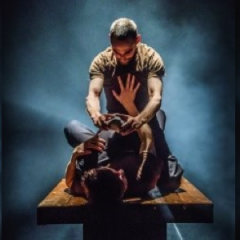 An astonishing performance of physical theatre, dance and rhythm