A moving tale of friendship set in the First World War

In this journey back in time, we travel to Edinburgh in 1917 at the Craiglockhart Hospital. Here at the hospital several colonels and soldiers are sent to recover from the trauma of the First World War, until they are newly fit to fight again. Haunted by nightmares and ghosts from the experiences lived on the battlefield, two war poets Wilfred Owen and Siegfried Sassoon meet for the first time and form an intimate friendship.

In a moving story of companionship, the two poets develop a deep connection while sharing their war experiences and their passion for poetry. Owen (Iestyn Arwell) is a shy young man starting out writing his first pieces and asking Sassoon (Daniel Llewelyn-Williams), whom he admires, for suggestions and directions for improvements. As the two characters grow closer to each other, the different personalities - one, shy and passionate, the other defensive and proud but also craving intimacy – struggle to admit their feelings for each other.

The stage is organised as a symbolic environment for this story. The bed might be a signifier for death, illness and trauma, but also intimacy and private sphere where to write personal letters. A dark wooden desk stands for poetry and writing but also for a defensive barrier. Ambivalence characterises the space around them.

The dramatic performance is enhanced by the heartfelt war poems declaimed by the actors. The intensity and passion towards war, freedom, death and camaraderie find a new light and meaning in the spoken words performance. What has not been expressed before, it suddenly acquires clarity and pathos. It is a beautiful play able to explore through acting and poetry different shades and layers connected with trauma and belonging in the First World War.

Not About Heroes will play at the Pleasance Dome at 12 until the 28th of August, 16th and 23rd excluded. 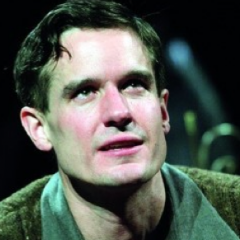 A moving tale of friendship set in the First World War