Telling jokes that are so bad they're brilliant solidly for an hour makes for a completely novel and hilarious set.

With a handwritten PowerPoint, Field takes us, turn-by-turn, through one-liners and golden anecdotes that are all so completely silly that you can't sit there honestly and not want to laugh.

It wasn't easy for him though. A two-thirds full Pleasance Cellar greeted him. When introducing a performer on stage, an audience ordinarily gives them a fairly passionate applause based on the excitement of what could be a top routine, even if you don't know how it'll turn out. Field was punished with a light smatter of applause, which he called out immediately exclaiming, "Tepid. Nice."

As he should, he carried on with a proud smile on his face: proud of what he knows is a collection of rubbish jokes. He riffs on all the fun things you can write on calculators, the origins of the names 'shampoo' and 'umbrella' – the latter being one the best and most memorable one-liners I heard this year – and the stories behind each time he pooed himself.

What's more, the power of the gags that get the bigger laughs is such that the audience will at least giggle at the gags that don't land as well, but of those there are barely any.

It's complete madness taking an avenue that is impossible to anticipate, making the payoff for the next utterly random gag all the funnier. Given his young age, the BBC New Comedy Award runner-up used enormous ingenuity to create such a unique show, playing entirely on one type of joke, rather than one type of comedy. This allows him to transcend absurdist humour and present a chameleonic routine.

Take a look at his Twitter and you'll see the type of joke I'm talking about but the stoic grin with which he says everything, timidly reluctant to raise his voice is the majority of his completely brilliant, classless humour.

The Andy Field Experience is on at the Pleasance Courtyard at 21:45 every night until the end of the Fringe. For tickets and more info, visit the Fringe website. 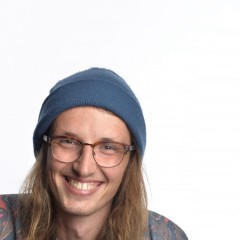 Telling jokes that are so bad they're brilliant solidly for an hour makes for a completely novel and hilarious set.