Starting his first foray into animation a bit late left more to be heard than seen.

Birdman's illustration have been the strength of his shows, with some vividly designed pop-up sketchbooks. Going into animation didn't work as readily well. The style of the animation was very staccato, and not in keeping with the visual style of the illustrations, which itself wasn't quite at the standard we're used to from Birdman.

There was a bit of an episode when Birdman invited a talking audience member to leave, which added a tangible awkwardness to the routine.

Beside that, the satirical story of Rumpelstiltskin was measured and well rehearsed but the talking between chapters of the story was more compelling than the video. This was down to great audience interaction and anecdotes about the sassiness of his young daughter.

The show represented a creative risk and the free Fringe is the place to do it but ordinary stand-up comedians know to re-write or chuck jokes that don't work, but it'll take a fair bit of effort to re-work an animated video.

From absorbing and compelling illustrative comedy storytelling, the quality of the cartoons themselves appear to be more powerful than you'd expect. The other cogs of a dark comic story with pithy jokes are in place but they need some oiling to live up to Birdman's previous work.

Markus Birdman's Between the Devil & the Deep Blue Sea is on for free every day at 15:30 at Bar 50 until 27 August. For more info, visit the Fringe website. 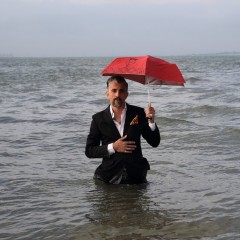 Markus Birdman's Between the Devil & the Deep Blue Sea

Starting his first foray into animation a bit late left more to be heard than seen. 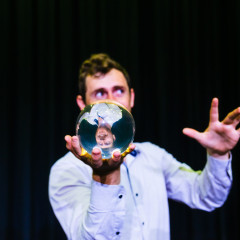