The Kinsey Sicks are world famous with a style as recognisable as you'd expect from their clout. But finding current parallels with the situation back when they formed 24 years ago forced them to add a new dynamic.

From one the world's foremost drag acts you can expect electric energy from a highly connected group packing out venues far bigger than the Gilded Balloon Library's Auditorium. I'll be clear from the off, don't you worry; you still get all of this with flawless vocals and make-up while integrating some pithy commentary into it.

With this commentary is where Kinsey steps up greatly. In my review of Scott Agnew's show, I described nowadays as a bit of a blessing-and-a-curse time for the LGBTQ+ community – this is really only the case for the UK while celebrations for the 50th anniversary of the legalisation of homosexuality go on.

In Kinsey's America, you would find it hard to argue it's a different situation following the President's recent tirade against transgender service people. 24 years ago, both sides of the Atlantic were amid the HIV/AIDS epidemic, with the LGBTQ+ community facing violent or fatal persecution. With this step backwards, it's time to talk about it without spectacle. The show addresses the parallels by being a no-holds-barred, but abridged version of the history of The Kinsey Sicks.

It was more than sexuality, though: Trixie laments representation, or lack thereof, of people of colour at festivals and pointing out myself and the only other in the room.

Once or twice, Rachel, the only remaining original member of the troupe sits and just talks, in simple terms, about the state of affairs before bounding back to join the rest to harmonise perfectly with her own filthy innuendo.

"When lying becomes an ability, ability becomes a liability."

Dipping into reality in and amongst some pristine musical numbers and some of the best political gags of the year grounds this year's show.

Things You Shouldn't Say makes for a heartfelt show with all the same unhinged entertainment.

Kinsey Sicks: Things You Shouldn't Say's run at the Edinburgh Fringe has finished. To see where they'll be next, visit their website. 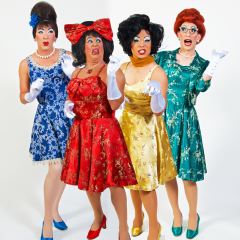 The Kinsey Sicks are world famous with a style as recognisable as you'd expect from their clout. But finding current parallels with the situation back when they formed 24 years ago forced them to add a new dynamic.