An amusing stand-up comedy show drawing on the personal story of Francesco, an Italian comedian based in London.

Francesco's entertaining story is based on his experience of leaving his own country, Italy - his comfort zone - to follow the dream of being a comedian in the UK. Without focusing too much on the stereotypical traits of Italian comedy, he wins the audience over from the first few minutes. His clever jokes mix cultural references both from Italy and the UK. He is able to make the audience laugh as much at Italians as at themselves.

In one hour of pure entertainment, he recalls his long journey that brought him to be now a comedian, firstly working at the European Commission and then as a radio presenter in Italy. The performance runs very smoothly and is very well structured. He keeps building up new material from previous lines. The element of surprise comes in when he throws in little references to his previous jokes, making them even funnier.

We can't help but laugh at his take on being an italian immigrant in London, among stories of misunderstandings, cultural clashes and drunk phone calls. With his comedy show, he is able to speak to a very wide audience without compromising his personal and cultural identity. He can make people relate to his experience in Italy as much as when his first moved to London.The final response of the audience was very enthusiast and pleasantly surprised.

Coming out from his comfort zone, Francesco has shown to be a promising comedian very welcomed at Edinburgh Fringe!

Francesco De Carlo: Comfort Zone will be performed at 21,20 at the Underbelly in George Square until the 28th of August. For tickets and more information visit the Ed Fringe website. 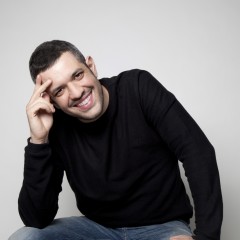 An amusing stand-up comedy show drawing on the personal story of Francesco, an Italian comedian based in London.