In a saturated market of improv comedy, Improvabunga! adds its unique mark to the Fringe. The whimsical adventures offered by this comedy group allows for a family-friendly show. Despite being a student show, the adventure produced was engaging if a tad convoluted. This is almost forgivable for an improvised show because it did not lose audience interest.

Criticising the storyline of an improvised show is always a flawed endeavour, as it is always a weakness for improv. So, discussing the lack of memorability of the storyline is not productive, however stating that their ability to provide clear motivations for the characters and a definitive overall arc is due.

The individual performances of the actors were energetic and difficult to fault. The characters were clear and defined. These always fit seamlessly into the audience participation, where they have buzzers which can be pressed to cause actions like 'kiss or slap'. This allows an accessible atmosphere to the event, allowing their superb performances to flourish.

The use of live music, from their keyboardist provided flawless accompaniment. The impressive improvised compositions elevated the professionalism of the show. While the 'improvised' lights were a tad distracting from time to time, they effectively used the equipment at their disposal.

This well-paced hour of comedy would be easy for any reviewer to recommend. The atmosphere produced is nothing short of extroverted, so with that in mind it will appeal more to a person of that disposure. However, I would not deter any improv enthusiast or resident of Edinburgh from spending their evening at this thoroughly enjoyable improvised adventure. 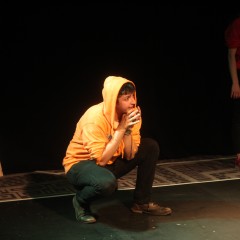