I don't know if Beadledom was made so that you sat through Omega as exposition to get the meaty imagination of Alpha, but the comparative excitement made it seem that way.

There was better synchronisation between on stage and behind but it was far from perfect. The artist who brought us a diverse array of puppetry playing with silhouettes was too visible, with her hair and hands popping into the screen where they shouldn't have. This made for a clumsy visual.

Sadly, when it was done right, it still felt a bit underdeveloped, as I mentioned in Omega. To signify the creation of life in the cosmos, our protagonist, Max, played by Edward Cartwright mixed together chemicals, the mix of which was visualised using a module on screen showing, using coloured acetate, how much of each element it took to create the right mix. The acetates, when they weren't overlapping and unfitting, were wantonly placed and the using of fanning fingers to signify loading or mixing wasn't quite in line with the tact with which Cartwright played his character. The thought was a noble and fun one, though and it's worth recognising the difficulty of silhouette puppetry.

On the plus side, Max was one whose curiosity was vivid and comedy more explicit. He would clean his hands with NHS hand sanitising directions, which was telling of the monotony of the work life.

The crux of the story was warm and touching. The life Max created was one with whom he felt immense, seemingly nascent care and empathy, which was telling. This began in the tea break, a period of time where Max was allowed to switch off and dream.

The mix of animation and puppetry was better put together creating a story that had us asking how we act when we're curious of the outcome versus when we're morally obliged to fix it. The way the final part of the story was told was inspired. Playing with the depth of field of projection of focus on minutiae was beautiful and a passionate and vivid invention of imagination. 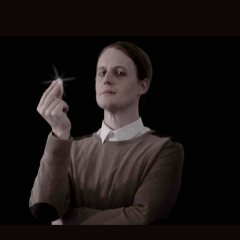 I don't know if Beadledom was made so that you sat through Omega as exposition to get the meaty imagination of Alpha, but the comparative excitement made it seem that way.