A poetic tale of religion, love and misplaced devotion

Shows about religion are always a risk; people generally have one of two very strong opinions on the matter. Poetry is much the same. Richard Marsh and Sara Hirsch tackle both, delicately swaying between theatre and spoken word, love and obsession, engaging the audience and causing them to switch off. The show is primarily performed on stage only by protagonist Todd, 'the chosen one' played by Marsh with voice-over narration from Hirsch playing God.

Marsh's performance spoken word performance flows well and is rhythmically pleasing to the ears. His undulating intonation and animated expressions echoed those of someone hosting a sermon and at times it did feel a bit like religious recruitment, but his use of paralinguistics mostly served to aurally seduce the audience.

It felt confused and confusing. The content of the writing had no clear narrative journey; parts of it were overcomplicated and never clarified, while other parts felt repetitive and somewhat patronising. The writing that did work, worked very well – there was interesting discussion around the morality of God and religion itself through time. This was emphasised through the exploration of perspective, concerning topics such as proof, expectation and truth and if these had been consolidated further and with more focus I feel the show would've been more successful. At times it felt like they attempted to cover too many issues and in doing so sacrificed the depth and integrity of the show as a whole, although I can understand why they aimed to tackle what they did.

The show was sensitive and its take on love was original and thought provoking Marsh's characterisations of the unseen roles, namely Helen, Todd's wife and her Vicar father, were descriptive and excellently executed, at times I felt I had a clearer image of who they were than the protagonist on stage. Marsh and Hirsch are obviously talented, however this time the risk to take on something so epic didn't quite pay off. 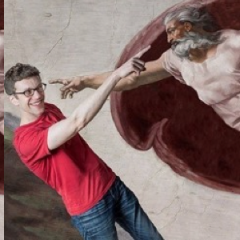 A poetic tale of religion, love and misplaced devotion