Last year, I called Nelson's comedy uniquely pure and understated and I was a bit worried that that significance might not last seeing him even just once more.

To tell you how that panned out, allow me to open on a cliché: my face wishes Nelson was less funny so my cheeks would ache less.

Not only did Nelson keep to his unique, simple style, he weaved the perfect element into his routine to ensure it endured and got even better: he made it darker.

Nelson has gone viral with his short web series, News At 3, picked up by the BBC, wherein he discusses the news with his three-year old daughter. It's an adorable affair. Early on, he prefaces Irreverence by explaining that, if the audience is here on the basis of his web series, they're in for a shock. To be fair, even on the basis of last year's show Smiley Face, I was, too.

Internet fame brought with it, obviously, some bizarre and unwarranted death threats and criticisms. This is experienced by many comedians and is used by them to ceaseless laughter. Few of those, however, have the rebuttals that Nelson cooked up.

More originally, a substantial chunk of the routine was owed to the sordid and dirty cavities of stay-at-home fatherhood. I say that Irreverence is darker, but it, overall, is far from the established dark comedy acts at the Fringe. However, with this chapter, he wrung out just enough laughs – and they were plenty – with the darkest inoffensive single story punch line you'll hear this year.

I was then made the arbiter of young people's issues as he posited why young adults do 'fuck all'. In doing so, without being attacking or tactless, Nelson clocked the audience in a cycle of raucous laughter with every single joke about nowadays.

Allow me to finish on a cliché. Straight faced and stationary, he had perceived conviction in every opinion he expressed in this golden, singularly comprehensive, majestic hour of comedy. Nelson delivers another prescribed, no frills crescendo of my week at the Fringe.

Mark Nelson: Irreverence is on at 20:00 at the Gilded Balloon Teviot every night except 15 August until the end of the Fringe. For tickets and more info, visit the Fringe website. 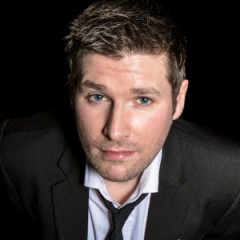 Last year, I called Nelson's comedy uniquely pure and understated and I was a bit worried that that significance might not last seeing him even just once more.