Captivating, intense and powerful - a whirlwind of emotion and expression that will leave you speechless

Every movement, every emotion, every interaction is heightened in this stunning explosion of life on a bare stage that becomes your entire world for an hour. Temper Theatre's production is a whirlwind of a show, the likes of which I've never before witnessed.

Words are muffled, conversations held using gestures, characters established through actions. The dancing is beautiful, with the performers throwing everything they've got into every single move so that their emotion shines through as strongly as if they'd screamed at you. The music is intense and has a relentless beat that weaves throughout the performance, and the lighting is truly spectacular, with an emphasis placed on backlights to create silhouettes. This skilfully enhances the focus on the performers' bodies rather than any words.

This show is whatever you make it. I discovered this after the first ten minutes, during which I was intrigued but confused; wondering what on earth was going on, I decided that instead of trying to work out what they were trying to convey, I'd put my own meaning on it. I saw the performers as trying to escape from the dull drudgery of a corporate world, and expressing the freedom that comes with just being. Instantly, everything made sense.

And this, I think, is the point. Through physical theatre and dance, Temper Theatre have created a piece that is accessible to anyone and everyone. You may interpret what you see however you like; no matter how you do, it will resonate with you. There is no escape from the sheer emotion and energy on that stage. It will blow you away. 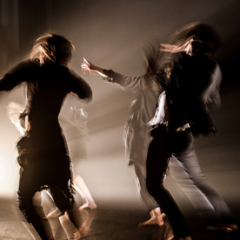 Captivating, intense and powerful - a whirlwind of emotion and expression that will leave you speechless