Voice MagReviewsThe Man on the Moor

Max Dickins stars in this one-man show that focuses on a ten year old boy whose father disappears, and how he copes with it over the next two decades of his life. It is, perhaps surprisingly, a story of happiness, of finding peace, and - most of all - of hope.

The play is inspired by the story of David Lytton, the man who remained unidentified for almost 18 months after his body was discovered on Saddleworth Moor in December 2015. Before he was identified, 40 different people went to the police, convinced he was their long-lost relative. All were wrong. Dickins' character is one of those 40 - believing 'the man on the moor' is his father, he begins an obsessive search for answers that, ultimately, proves fruitless.

There is a restless energy to the piece; Dickins can't stand still for more than a moment, and the momentum of the performance keeps the audience engaged throughout. He is likeable from the start and his continuous breaking of the fourth wall as he speaks to the audience makes him more approachable; the whole experience becomes more personal.

Video footage of David Lytton on his last day alive adds another personal touch - seeing someone makes them real, rather than just a name or a statistic - and information on missing people at the end drives home Dickins' message perfectly. I didn't quite understand the broken, abstract video of a woman speaking the mother's lines (it seemed superfluous and jarring compared with the flow of the rest of the piece), but otherwise media was used well.

But my favourite element of this show is undoubtedly the script. It is beautifully written and incredibly poetic, and I found myself writing down specific phrases because they were so profound. Dickins describes using words to describe feelings as 'like trying to play a symphony with a bucket and spoon'; this is just one of many examples of truly stunning penmanship. His words and his message will stay with you long after the show ends.

The Man on the Moor is on at Underbelly, Cowgate at 15:00 until August 27th. For more information and to purchase tickets, visit the EdFringe website. 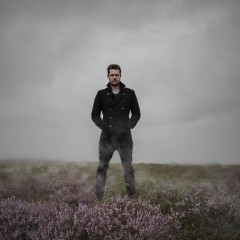 The Man on the Moor