This year has taken its toll on many of us. In the news we've seen one tragedy after the other affecting the mood of many, causing more and more people to just switch off. With the aim of making us smile, maintaining our concentration and warming our animal loving hearts, Hannah Chutzpah interjected her spoken-word poems with projections of greatly loved animal GIFs. Spoken-word and moving images of cute animals is a current and interesting angle to pitch a show, and I was excited to go and watch it.

At this point it is important to point out that the show was part of the free Fringe, so the same level of technical professionalism and venue management cannot be expected, and this is out of the performers control. However, the problems were huge in their impact on the show and so have to be considered. The show started late meaning throughout the performance Chutzpah kept having to skip poems within her schedule meaning the slide show was out of sync, disrupting any flow and distracting from the lasting messages of the previous piece.

The poems were ordered in relation to Maslow's Hierarchy of Needs and correlated in message and theme. Saying that, it was very difficult to hear Chutzpah, in between the lack of microphone, eventual waving around of the microphone, and the noise of Waverly train station very close by. It really was a shame as from what I could hear the content of each poem was very good and worked well with the next. This was echoed as I happened to go to another spoken word show 'Other Voices Spoken Word Cabaret', in which she performed – it was so bittersweet as listening to the intelligent and moving language she crafted I realised how much was lost during her solo show due to technical difficulties.

Other problems included poor projection quality and size – the GIFs were distorted and the remote wasn't working properly, once again disrupting any fluidity of the performance. These problems can be put down to both lack of preparation/professionalism and unavoidable failing technology.

Anxiety and Animal GIFs is a show with potential, written and performed by a sensitive and skilful poet but let down by a litany of complications.

Please note: due to the unavoidable nature of many of the issues experienced on the day, I will not be giving the show a star rating. 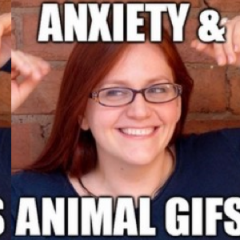