Not only do we get to know all about Perkins' worst decisions, she explores precisely why.

There's always a danger with comedy that tries to mix another not-so-related form into it. Some comedians attempt to dress down the audience with a serious address of the facts, which can either enthuse or diffuse the comedy. Similarly, there's a delicate balance between facts and explanation against comedy that means just a little too much explanation can bore an audience. We're fans of Baba Brinkman for this precise skill.

Unsurprisingly, Perkins has the knowledge of stage presence to pull this off, too, enabling her set to be well-informed and getting this across to the audience. In so doing she managed to keep the audience's attention through hard science in a sweltering room – no mean feat.

You could hear Perkins talk about her past all day – there is no end of audacity, shock and perceived growth. Though not all jokes landed, you could see what needed to be done so that each one would.

She has enough ammunition just from her life experiences to carry a solid hour of comedy without needing to resort to the comedy trifecta – gender politics, racial politics, or actual Politics. A golden performer whose charisma alone on stage is refreshing.

Robyn's Bad Decision Time is on every afternoon at 14:45 at Finnegan's Wake everyday except 15 August for free for the rest of the Fringe. For more info, visit the Fringe website. 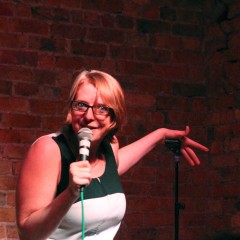 Not only do we get to know all about Perkins' worst decisions, she explores precisely why.