From growing up to grown-up

The transition between grown up and full blown independent living, bill paying, compromise-making adult is scary for most. This 'quarter life crisis' formed the narrative for Yolanda Mercy's show of spoken word, theatre, and comedy. The clever writing was coupled with clever sound and animation; she made use of Emojis to visually illustrate key parts of the narrative, echoing the youth centred content to the show.

Mercy plays the character of Alicia, aged 25, with conflicting ideas of what she wants. Whilst lifts from mum and a 16-25 railcard can definitely be advantageous, stability in a career, a relationship, and her own place are the ultimate goal - it's just looking impossible to get there. Using spoken word, Alicia's story unfolds, growing up in the ends of South East London, with Nigerian heritage and split parents, the tribes of Alicia's identity are cut and woven and torn as she grapples with the fabric of her very being.

The writing is excellent and carries the narrative impeccably well, never once do the characters get confused and the fact it's a one-woman show only adds to its successes. Feeling stuck regardless of whether things remain static or change entirely is isolating and this is cleverly reinforced through her isolation on stage, yet contrasted with upbeat diegetic music and movement to vary tone and pace.

The acting was always convincing and emotional and at the points where I could not directly relate to the content, the powerful emotion carried the plot – I remained engaged and connected. Whilst holistically the show was successful on multiple levels I felt like some of the comedic elements were unnecessary and fell flat, slowing the pace and distracting the audience at points forcing me to detract a star.

The messages conveyed in terms of individualism and the differing rates at which young people grow up, who actually decides when you're an adult and what that means, were contemporary and thoughtfully delivered. The show was cool and fresh and this young writer's huge potential is crystal clear. 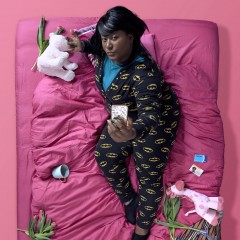 From growing up to grown-up