A fun and clever play about Scrabble, words and memory

Austin is a Scrabble world-champion. But he is losing his memory. He has been diagnosed with Alzheimer's, and so begins to record all of his memories.

Blank Tiles is a poignant exploration of Alzheimer's through a one man play - looking at how a man who's life's work has been to remember words, deals with it when he begins to forget. The play begins at the moment Austin wins the World Scrabble Championship - then he recounts his memories which led to this moment. Dylan Cole plays Austin, depicting an anxious-looking, fumbling man, who has an 'avid' love of Scrabble, jazz and film noir. All of these hobbies are things that Austin enjoyed with his grandmother, who has passed away.

Listening to Austin recount his story is quite funny - it is easy to laugh at his quirks at first. Gradually, it spirals into sadness, as we see him missing bits out, and repeating things over, or getting them entirely wrong. We cannot actually be sure what the truth is as different versions begin to arise. Throughout this tale, Austin is using his Scrabble tiles to decode anagrams and recounting his games, as well as first meeting his wife Daisy.

However the play fails to really dig deep into Austin's character, and there are many questions left unanswered. We don't know why he lived with his Granny or why he didn't used to go outside. He talks about Daisy in the past tense but we don't know what happened to her. While the portrayal of Austin's fading memory is sad, it isn't as emotive as such an event would be - and there are many portrayals which achieve far more hard-hitting and stark representations of the disease.

The use of Scrabble and playing with words and anagrams is a fun, and clever mode of representing this story. Equally, the film noir fantasies were a great way of offering variety and a little bit of comic relief to the story - also testifying to Cole's acting ability in switching character so seamlessly. The play is enjoyable and an interesting take on Alzheimer's disease and it certainly has the potential to be a fantastic insight and exploration into it, if it just dug a little deeper. 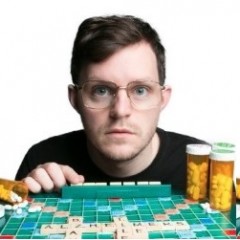 A fun and clever play about Scrabble, words and memory