What crazy dreams could one have while drunk on a beach in Mexico? Richard Sparks' Margarita Dreams tries to render the idea with a series of sketches. In an absurd atmosphere, four actors perform not related crazy dialogues. We witness the disappearing of Brad Pitt's trousers, unmotivated anxieties for phones, cross-dressing robberies, mysteries magically solved in five minutes, and much more.

The entire show is very random and goes beyond the supposed purpose of representing a drunk hallucinatory reality. The silliness stops being funny when this narrative keep being reiterated again and again. Despite the willingness to experiment and perform on stage something unconventional, the audience doesn't react to the sketches as expected - a few people walked out in the middle of the show. Some of the jokes were dramatically charged. After, you could almost feel a pause while a laugh out loud reaction was expected. Instead, just a timid giggle came from the audience.

The actors put energy and commitment in the show, with some funny jokes, including the one about the group therapy for shy people. With the help of a silly doctor to curate shyness, the participants are dragged to a crazy disco dance to exorcise their fears. It could have been amusing and engaging but the original idea wasn't communicated very effectively, and this is sadly true of the whole show.

Margarita Dreams will be performed at the Underbelly Med Quad until the 28th of August. For tickets and more information visit the Ed Fringe website. 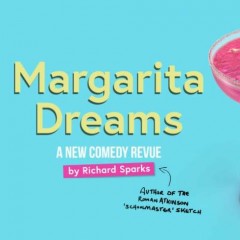