Voice MagReviewsThe Not So Late Show…

This show starts with potential. It has a charismatic host (Ross Brierley), a house band made up of a plastic baby in a high chair and a very funny sponsorship advert. Soon, however, it becomes a slightly tedious repetition of jokes and questionable impressions, which brings it to a disappointing conclusion.

The interviewed 'guests', all of whom are played by Josh Sadler, aren't particularly interesting; the funniest part of the interview with the T-Rex from Jurassic Park was the accidental deflation of the costume. The majority of jokes fell flat, and some of the laughs received seemed to occur out of awkward British politeness rather than real amusement. There were a few genuinely funny gags, but these were quickly lost among the mediocre humour that filled the show.

The aforementioned funny sponsorship advert was milked until it was no longer funny, and Brierley kept mentioning a later segment that had potential to be amusing but never actually occurred. A game show, hosted by a Bruce Forsyth whose moustache fell off halfway through the intro, was only really successful due to the enthusiasm of the audience member who participated, and was the only part of the show that didn't drag on for too long. I found myself glancing at my watch far too frequently, and was relieved when it finally ended.

A mediocre and disappointing show that misses the mark in more ways than one.

The Not So Late Show With Ross and Josh is on at Pleasance Dome at 22:45 until August 28th, excluding the 14th. For more information and to purchase tickets, visit the EdFringe website. 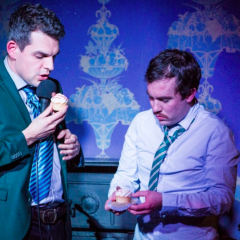 The Not So Late Show With Ross and Josh