Slapstick, silliness, and a whole lot of fun

This version of The Three Musketeers might not be entirely true to the original story, but it'll entertain children and adults alike with its utter madness. Filled with singing, fighting, cross-dressing and set destruction, it's full of excitement and an utter delight to watch.

The slapstick is utterly brilliant, with the three performers slapping, kicking, punching, pulling and whacking each other, not to mention bashing each other's heads with metal trays and tearing down half the set. It's impossible not to find yourself grinning at the ridiculousness of it all, and it's so well executed I even flinched a few times because I was sure one of them must have sustained a concussion!

A beautifully painted cartoon-like set is used to maximum potential by the performers, and a number of impressively quick costume changes allow the three men to play everything from monks to a newborn baby. I was also a very big fan of the physical theatre segment, which featured grown men in tights prancing around the stage.

The actor who takes on the role of the idiotic character, Dick, does so wonderfully, creating a loveable persona who really can't do much right and whom the kids absolutely adore. Mixed in with the nursery rhyme references and Macarena performances are some more adult references which the parents in the room thoroughly appreciated, and everyone in there seemed to be enjoying themselves, regardless of age.

There were some points, however, when the performers lost the children's interest; periods of narrative that went on slightly too long, or songs that were repeated one time too many, and the kids became restless and bored. They were able to recapture their attention, but there were a few of these lulls which interrupted the flow and energy of the piece.

Overall it's loads of fun, a good laugh, and a show parents can enjoy just as much as their kids.

Three Half Pints Present The Three Musketeers is on at Gilded Balloon Teviot at 12:45 until August 27th, excluding the 21st and 22nd. For more information and to purchase tickets, visit the EdFringe website. 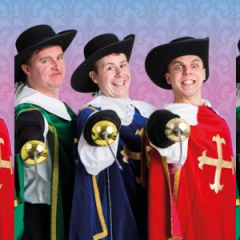 Slapstick, silliness, and a whole lot of fun