Sometimes you have to take things one day at a time.

American Midwesterners can have a definite stigma attached to them, particularly since the recent election, so to come on stage in Edinburgh under the guise of one American stereotype, only to strip back that character and expose a former suicidal part of herself was incredibly brave and the audience required some convincing. Annie Sertich revisits a period of her life with divorce, death, love and friendship to talk the audience through how not to kill themselves, one day at a time.

Americans love therapy and suing each other, this became explicitly clear very quickly as Sertich tells us of what can only be described as a year from hell. With just her on stage it's conversational and interesting, I feel spoken to individually but in reality am one of many audience members and sat 3 rows back. The real success of her show lies within its intimacy, it feels personal and exposing and raw - and it works. The isolation she creates for herself on stage only adds to the authenticity she exhibits, allowing the audience to react emotively and fill gaps between her life experiences and theirs.

Her use of audio and visual effects was excellent, matching the narrative with photographs of people and scanned copies of notes she wove the stories beautifully. When other characters were needed to illustrate a point or offer an alternative point of view, to a concept or conversation she stepped up, creating distinguishable voices which helped to clarify rather than confuse. The show took a little while get going and not everyone was on board, with a few walk outs at the start, which I'd put down to differences between expectations and the reality of the content and style being different. That being said, some moments did fall flat, notably when moments which should've been met with laughter were met with silence, but perhaps this is due to American and British humour being famously conflicting.

"It doesn't get any easier, it just gets different' – Annie Sertich offered traditional platitudes in a manner which meant they held weight and meaning, even after leaving the room. 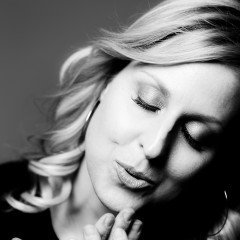 Sometimes you have to take things one day at a time.