To end your day at the Fringe with a great hour of entertainment, go to see Terry's show. He returns to the Fringe with an explosive performance that makes people cries with laughter. His comedy routine, inspired by his acclaimed radio show on BBC 4, mixes with his astonishing ability of improvising jokes in a hilarious climax. He interacts very smoothly with the audience as everything was already scripted, even if it is not.

If you are lucky enough and there is a completely drunk man in front row – as it did to us – the laugh spreads among the audience as a virus that nobody can stop. Audience interaction and improvisation becomes such a relevant part of the show that we nearly forget the actual comedy routine.

His comic singing duet with Johnny Spurling is just one of the many highlights of the show. Their powerful voices deeply shake the audience with surprise, when after silly, catchy songs they use their full vocal ranges. Terry's talent in modulating the tone also emerges when he impersonates his inner voice, a hilarious side comment of the show and everything that happens around. In a Gollum-esque style, delivered by different personalities, Terry doubles the fun.

Alternating different characters, he maintains his unmistakable energy on stage. Initially, wearing a blonde wig and a kilt for the duet of the two Johns, he changes in his all black outfit matched by a black line under his blue eyes. A crazy insight into Terry Alderton's world, the show raises ardent enthusiasm among old and new Terry's fans. 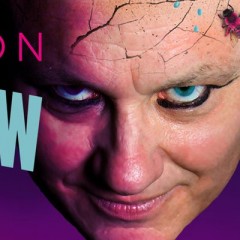