Deserves every award he wins

There is often a tendency to throw the word random around when describing a show that was a little bit out there, but I genuinely struggle to come up with a more apt one?

Bombastic? Unhinged? Unstructured? F-ing insane? Any and all of these would be totally appropriate to describe Mark Forward's show, as long as they were accompanied with 'so funny you come out feeling physically assaulted'.

Over the course of the show we watch Forward complain about having to make sandwiches, play with a toy bee, completely ruin the nursery rhyme 'Hey Diddle Diddle', and made sure every single member of the audience hated Bonnie Tyler.

His style of delivery is one one of explosive energy and anger. A lot of American (or Canadian) comedians seem to adopt a shouting style, but Forward takes it to a new level. He paces around (and indeed behind) the stage with the ferocity and pent-up aggression of a caged tiger, lashing out at the subject manner, spittle flying everywhere, but he's also very quick to laugh at the whole surreality we found ourselves in.

He joked about not having a long of time to write the show, and it's hard to know whether or not he was serious. Whether it was meticulously planned lunacy, or truly off-the-cuff unplanned hilarity, Mark Forward exhibited phenomenal skill in the art of comedy, and you absolutely have to see him. 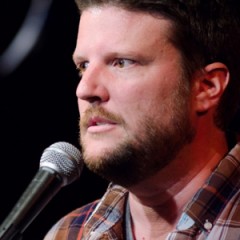 ​Mark Forward Wins All the Awards

Deserves every award he wins