This is not a show for those of a sensitive disposition. There is essentially nothing remotely PC about this Australian trio, from the strong, sexually language, to the mocking of "cripples", to the constant jokes around death and geriatric sex. And that's before you get the songs and the suggested abuse of vulnerable people.

However, if you can look beyond all of that (and luckily, all of the audience could) then you are going to have a fantastic 80 minutes of dark, stereotypically Australian humour, performed by those who most certainly aren't afraid to mock their own mortality.

I went into DAAS without any knowledge of the history of the group, but I left determined to find out everything I could. If it wasn't apparent by their aged appearance - some who've embraced it more gracefully than others, they'd be the first to admit - DAAS have been around for a long time, and have a bit of a brokered history. This meant they have a wealth of material, stage experience and a working relationship that truly came to light when performing.

The vocals by Tim Ferguson and Paul McDermott (who also served as the main entertainer of the evening), with guitar provided by Paul "Flacco" Livingston were all exceptional, filling the room with raw and deeply inappropriate songs that had the audience simultaneously gasping for air and mentally chiding themselves for finding such content funny.

Even the visual spectacle was impressive. The use of projected MRI images combined with constellations was beautiful to watch, to the point of almost being distracting. McDermott's smooth moves were also a visual spectacle, unmatched of course by Ferguson's wheelchair dancing.

It wasn't perfect though. A few sections did drag on beyond their welcome, and then continued a little while more, just to make sure we were truly sick of it. I equally, although exceptionally receptive to some of the more… risqué comedy, felt that the disabled jokes were over used, regardless of how many times it was said to be inclusive.

If you are a sick and twisted individual, whose humour means you're never asked to make speeches, this is certainly going to be the show for you. 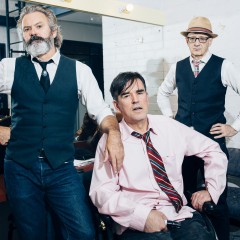