A fantastic first half, which was ultimately let down

Will Seaward certainly looks the part for his performance, greeting the audience as they enter, wearing a Victorian style waistcoat, with long-dark hair and beard to match. His voice is the perfect for storytelling and his interaction with the crowd is fantastic because this became all important during the show.

In a mock up of a very traditional ghost story, he begins to read from 'The Book of Doom' and we get a Frankenstein-esque kind of story. The incredibly enthusiastic audience is soon oohing and ahhing in all the right places, making it feel really, inclusive, atmospheric and exciting. The story is a hilarious take on the classic horror, with ridiculous edits to mock the typical cliches of the genre, making the whole thing hilarious. The audience is captivated, engaged and often roaring with laughter. Seaward even deals well with external noise, making it the butt of a joke in itself.

This first 30 minutes was utterly fantastic and if the show continued in that vein it would have been truly brilliant. However, after finishing this first story, Seaward changed take and instead of the traditional ghost story we got more of a physically performed 'ghost detective' tale, where it became easy to lose the story and Seaward began to lose the audience. With a seance sequence which utilised Buckarooo as the 'voice' of the ghost, the show just became truly ridiculous. It became clear that the audience was now less interested, the shouts and laughter more sporadic and less unified.

Seaward tried to bring it back with a poem at the end, which recaptured some of the earlier humour but the atmosphere was evidently different. Had the show not included the seance and physical comedy it might have thrived throughout, as it was mostly incredibly clever, engaging and hilarious. However, it was let down by the second half which was really disappointing. 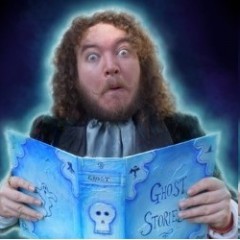 A fantastic first half, which was ultimately let down