Apphia Campbell, of Black Is The Color Of My Voice fame brings her remarkable voice to two stories of black women coming to terms of the reality of life for black people in America.

The more compelling is set against the backdrop of the Black Lives Matter movement, Joanne starts off unappreciative of what the movement is trying to accomplish. She has lived a sheltered life with her well-off family having no reason to encounter the police and indoctrinated with unwavering faith in the justice system.

On a macro level, it's a very well crafted script, taking extracts and drawing parallels with the story of Mike Brown. Alongside, Campbell tells the story of famed Black Panther, Assata Shakur. The elliptical telling of the events gave little time for a character's position and motivations to change so drastically but the chosen plot points were salient and nothing was wasted.

Joanne's process was one of going from adventurous idealist to a down-to-earth, militant arbiter of injustice. Perhaps a mistake, though I'd like to think not, was the change in Joanne's accent from suburban Midwestern to black southern vernacular. This could be telling of an acceptance of the black American experience being different to the American experience.

On a more specific level, some of the extended monologue from Joanne was somewhat melodramatic. This, in a partly musical show, isn't easy to avoid though. The power of Campbell's India.Arie-esque voice is such that carries redemptive powers for lacking elements of the show. For example, the only set was a wooden stool, side table and ottoman that were built together to create a door or a stage and felt clunky, but were clear at least.

WOKE represents a deeply moving mediation of the politics around the treatment of black people in America. This alongside the soaring voice of Apphia Campbell creates an enormous experience. 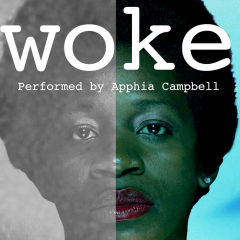