According to Eshaan Akbar life is complicated but when simplified, when the unexpected is accepted, life is for enjoyment, dream following and just being okay. Talking from his experiences of family life, living as a second-generation immigrant and living up to the pressure of cultural, social and academic expectation, Akbar formed his comedic narrative along the theme of identity.

The successes of the show centre on these interesting narratives, throwing a lens on a different family life and invited me to consider the positives and negatives of my own. However, generally the show lacked humour and strong pace, the packed out audience became distracted and looked bored at points which wasn't helped by his drawn out, over clarified stories. These repeated anecdotes may have been an attempt to make up for the lack of thread through the show, it seemed disjointed and confused which was frustrating as a reviewer as I could see it's merit and potential.

Akbar looked incredibly confident on the stage and used the space well to address and include the entire audience. His content was self-focussed but relatable and he balanced a semi-self-deprecating style without it getting heavy or too self-indulgent. His relationship with the audience worked really well; he included everyone in a friendly and light-hearted manner, steering clear of isolating any one person, using insult or forcing a response.

Eshaan Akbar entertains with ease. The hour was enjoyable and interesting but failed to make me genuinely laugh regularly enough to warrant any higher rating. He clearly has potential, but as a stand up comedian who wasn't that funny, has got some work to do.

For tickets and more information visit the Fringe website. 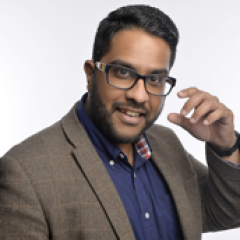 ​​Eshaan Akbar: Not for Prophet