Adomian's 'Dad' humour ultimatley gets lost in translation for a British audience.

James Adomian is an American from LA, wearing a shirt over a t-shirt and thick rimmed glasses; channeling Seth Rogen. His whole mannerism is similar, a chilled out easy kind of vibe. His stand up set is largely oriented around being an American - understandably, covering topics from national stereotypes, to being an American abroad, to politics - inevitably.

When touching on popular culture Adomian segued into what could only be seen as 'Dad' humour with lots of references to Star Wars, classic rock, Pink Floyd and wrestling - not to mention the 70s despite the fact that he is only 37 years old. With an entire segment on using and purchasing marijuana, it became clear that there was a little bit of a cultural barrier in the humour and it didn't carry well with this audience. Perhaps his funniest material was on his experiences of being gay, where it felt more personal. His political comedy was somewhat surprising - going in for Trump for being fat out of all possible reasons. However, this may have been a clever tactic to avoid the obvious, as was moving swiftly from Trump to Sanders, avoiding Clinton all together. Choosing the route of impressions however, was less clever, as such a high standard has been set by very famous comedians which could never be matched.

Adomian's humour was amusing but not laugh out loud funny - a feeling that seemed to resonate through the rest of the audience, although, there were a few people who seemed to be really enjoying it. Perhaps this was just a case of taste or maybe that some of his more US specific references and gags didn't translate so well to a British audience. However, he was interesting to listen to, and still completely held the audience's attention throughout. Adomian had the potential to be entertaining but was clearly not everyone's cup of tea. 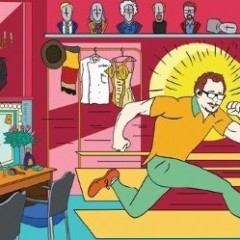 Adomian's 'Dad' humour ultimatley gets lost in translation for a British audience.