Chris Forbes' show opens with a film trailer. A Trainspotting spoof featuring Toy Story characters - Toyspotting. This seems to be a marker of the random and scatty but truly funny kind of humour which the audience is in for.

Forbes is full of life and eager to interact, chatting frequently with his audience. He wants to know where we are all from, and as a Scottish comedian, he inevitably has some material on different nationalities, but proves himself to be funny spontaneously too when faced with an Australian audience member, and again when he is chatting to a couple about marriage.

Much of his comedy pertains to his fiancée, and the personal element makes him incredibly relatable. He talks about those weird things that all couples do and while it is weird and hilarious, it is only so funny because everyone is guilty of that when they are in relationships, which is exactly what he aims to exploit.

Cleverly, Forbes prepared a comedy goldmine using a fake social media persona to find, and probe out online comments he could use as material. Adamant that he wasn't trolling but facilitating others' comments, he engaged people in conversation on everywhere from a Drumpf page to news articles about pineapple - and you would be surprised as to what yielded the funniest.

In a truly multimedia performance, Forbes moved from video and social media to live music. He tells the story of getting his first musical instrument, the accordion, alongside a demonstration to illustrate just how hilarious it is for hormonal and dramatic teenager to play the accordion and be taken seriously. Thankfully, someone finally gave him guitar lessons so we could be graced with the hilarity that was his attempt at songwriting age 15, not to mention the songs he creates for his fiancée now.

Forbes sustained a truly engaging and hilarious show. It was full of variety and energy and was constantly funny - engaging the whole audience. Definitely not one to miss, seeing Forbes was an absolute treat. 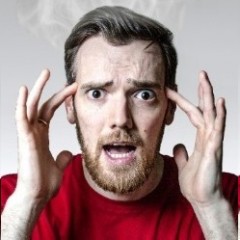