A show about mental health with potential but lacking cohesion.

Imagine a game show in which contestants have to dig into their mental health issues - scary idea right? Well that is the premise of 'That's My Mind' the gameshow at the heart of A Sudden Burst of Blinding Light. Presented by two larger than life and over-sequinned caricatures of presenters, the show is evidently a satire of the kind of TV professing to help people tell their stories, and instead exploiting them.

Contestants Jude and Leon both have their own issues to deal with. Jude's mum suffers from manic episodes, while Leon suffered from abuse as a child, and as an adult has the ability to make people disappear. This is where the play begins to get surreal, as it isn't clear if this ability is supposed to be real, or some kind of metaphor for dissociation or a coping technique. Jude and Leon have to suffer through a number of 'reenactments' from the overzealous hosts while they recount their stories, not to mention segments such as a guest performer in a velvet jumpsuit, and an attempt at mind-reading.

The overarching story of Leon and Jude and what is happening to Jude's mum seems to be hidden between this series of hijinx. The surreal and even ridiculous events may serve towards the satire but overall, as comedy it was a but lost on the audience. It felt like there was a lack of direction and no real point or message to this satire or exploration of mental health issues.

The piece was well acted and the set, staging and effects were all impressive. While the satiric elements were funny to a point, the underlying story between Jude and her mum seemed to be missed potential. The idea was interesting and intriguing but unfortunately it lacked the overall cohesion and direction that would have made it not only entertaining but also meaningful. 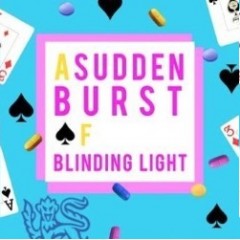 A Sudden Burst of Blinding Light

A show about mental health with potential but lacking cohesion.