A touching and beautiful play about grief and isolation.

The set is a sparse, remote wooden cabin, very literally and effectively setting the scene for this performance. As the lights dim, the narrator tells us this story begins with a 'boy, a girl and a wolf'.

From Dust centres around Gilly, a man who is celebrating New Years Eve alone in his cabin when, on the radio he keeps just for emergencies, he receives a call for help. A young man named Jesse has broken down and Gilly must go and help him. Obviously this is not as simple as he would expect, triggering a saga of events in which the two very different men are forced together and Jesse learns about Gilly's past.

Jesse is an idealistic young romantic, while Gilly, who lost his wife, is a cynic and skeptic. The omniscient narrator does a wonderful job, not just of telling the story but of tapping into their their thoughts and feelings, assuming their voices to convey words that go unspoken between them.

The performance has a wonderful use of music and projection - particularly in recounting memories and dream sequences and this is visually beautiful as well as effective, building an atmosphere of the natural world as well as of the relationships between the young lovers, Gilly and Ilva. These effects help contribute to the incredibly moving story of a lost love, which Sullivan Beau Brown, playing Gilly successfully achieves, with some heart-breaking moments of loss and sadness.

Though it may feel slow to start, the play takes a surprising turn and certainly picks up pace, growing more engaging and intriguing as it goes. Aspects of the show felt very abstract and even ethereal, in contrast with real life whereas physical events illustrated Gilly's memories and mindset. The story felt immersed in folklore, of wolves and the natural world and the effects portrayed this effectively. It was a well written and well executed production and a slightly odd, but incredibly moving story. It would be difficult to say a story about grief is enjoyable, but it is certainly touching, and definitely worth seeing. 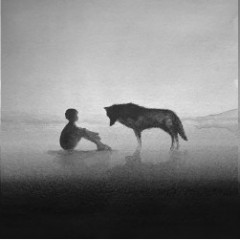 A touching and beautiful play about grief and isolation.