Jayde Adams has struggled to fit in all her life. Now, she's succeeding in the friendship stakes and it's time everyone knows.

She also knows the screenplay for Forrest Gump off by heart, this because she's had the alone time to learn it and more beside. She uses her time in front of us to list her numerous talents other than four-and-a-half hour readings of Oscar-winning scripts.

You'd think that losing friends is one of these skills but that's just an added touch.

Self-deprecation is Adams' bread and butter, it formed much of last year's show, 31. Now, it forms the crux of Jayded. She goes through her bad relationship with good friendships by rapping, getting a guest on stage to teach them how to be her best friend and delivering an almost pitch perfect rendition of that bit of Phantom Of The Opera Is Dead. Comparing it to 31, though, there is definitely a lower amount of audacity in her audience interaction.

Chronicling her friendships ends with her telling us all about her current best friend who has accepted her for her quirks and all and allowed her to engage with herself with positivity and a briefcase of tricks. With every gesture and facial expression, she is rewarded with a room full of laughter – no half measures.

There's a question about whether it was overly sentimental, but you realise who Jayde Adams is and what her comedic personality is made of, and have to give her credit for a lack of coyness that people still attribute to talking about emotional and mental health issues.

She made a proper step up after last year's show and needn't be afraid to become known for getting risky. 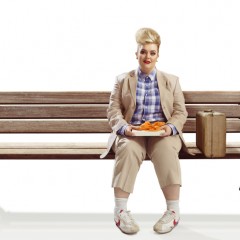 Jayde Adams has struggled to fit in all her life. Now, she's succeeding in the friendship stakes and it's time everyone knows.