Don't be fooled by the simple title! Behind Ken Cheng: Chinese Comedian, there is a show rich with clever and well-written jokes. Ken says that his routine could sound unambitious because of it, and he constructs his stage persona as a young comedian who feels inadequate on stage and randomly interrupts his own routine. But, contrary to the premise, his jokes never failed to make us laugh. From improvising with the audience to checking the room to spot if his mum has come to see him, the atmosphere was genuinely buzzing and exciting.

Riffing on racial stereotypes can be tricky, but not for Ken. Without using cheap jokes, he won the audience with his cutting irony. He mixed politics and current news topics, including Brexit and Drumpf, with puns and the hidden meanings of proverbs. Even graphs became an opportunity to laugh, as if maths has never been so funny.

Sometimes, feminism and criticisms to sexist comments can be used over and over without reaching the point. But, for Cheng, it wasn't the case at all. The jokes were polished and they didn't need to be accompanied by exaggerated expressions or body language to keep the audience focused. His peculiar style made the whole routine coherent and he gradually built up new lines from previous jokes.

A highly recommended show if you find yourself at the Pleasance Courtyard! 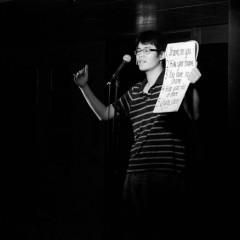