The story of Skin draws parallels with dance films such as Billy Elliot and Step Up as one of rebellion and acceptance but told entirely through dance.

The show opens with rudimentary hip-hop dancing creating rudimentary imagery. From here the show swells into evocative imagery owing to a story told with heart and humbleness.

The hip-hop dancing represented the seedy, ghetto habits that grew into a yearning for a new identity following an introduction to it via vivid street dance by a passionate stranger. Previously, prim, gesture based contemporary dance had been our protagonist's life: proper, prescribed and within the lines.

The dance could be interpreted literally, whereby dance was this young girl's life and her mother who dances how she wants her daughter to dance indoctrinated her into the practice. More cunningly, however, it is a physical tale of femininity and absconding from it.

A seven-strong cast of dancers created a gallery of beautiful images using halos and silhouettes that will stick in the audience's memories.

We see our protagonist as an adult and as a child in an affirmative non-linear narrative exploring where the agony of being who you want to be started and how it manifests itself in a terminal amount of pain. Throughout, their mother is an ageless, antagonistic figure whom they wish to keep happy, only to duck out and sate their lust for the life they yearn to live when mother's back was turned.

A slouched back and sitting with spread legs signified more who they were than fluid movement and snake hips. Skin is a coming-of-age story that is uplifting and telling from the slightest to the largest movements. 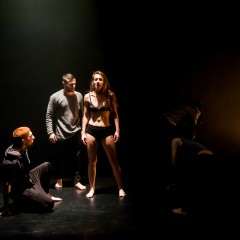 The story of Skin draws parallels with dance films such as Billy Elliot and Step Up as one of rebellion and acceptance but told entirely through dance.