Recounting her experiences with former partners, (although be sure not to use this much-hated term around her), Rachel Jackson plays the part of a delusional, paranoid and dependant human being.

Whilst this trope is much discussed and arguably even overplayed in comedy – particularly by women, (which can unhelpfully perpetuate stereotypes) Jackson toed the line between parody and reality, exposing the absurdity that love can cause. Taking us through several relationships in a manner as awkward and disjointed as her emotional state, the tone of the show is manic and high energy – unfortunately this didn't translate into entertainment.

The actor turned comedian worked hard to deliver a convincingly unhinged character, but it just didn't go down well. The audience seemed often disinterested, laughing insincerely and trying to avoid the awkward eye contact. Whilst I appreciate this awkward atmosphere was supposed to add to the plausibility of her character, and therefore the show as a whole, it sucked much of the energy from the viewers and cultivated an uncomfortable environment. Looking around, I saw pockets of people switched off to what was unfurling in front of them with Jackson unsuccessfully attempting to engage.

Moving on from one ex-boyfriend to the next we heard Jackson exclaim 'Over, out, next!', an appropriately unfortunate line to stick in my brain, and actually the only one I can now recall…

Rachel Jackson: Bunny Boiler had the potential to be a light and entertaining hour, instead I came out feeling lethargic and achy. 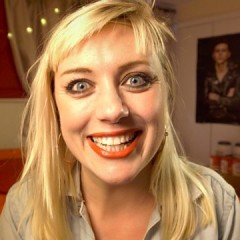