Enter Rose Matafeo with a series of cardboard 'credits' from 'Paramount Presents' to 'Starring Rose Matafeo' to introduce her show 'Sassy Best Friend'. The whole premise of the show is based on rom-coms and those peripheral characters who always seem to be on the sidelines. However, Matafeo is far from sidelined in this show where she is larger than life. Her show is a well put together stand-up which expertly uses music and lighting to embellish her comedy. Her jokes are all about timing and she has this down to a tee, keeping the audience constantly engaged and nearly always laughing. She is also unafraid to improvise, and is just as funny off the cuff as in her rehearsed material.

Her humour is inherently around the experience of being a woman but this is absolutely not lost on the audience, where there are a fairly equal number of men laughing along just as much. Matafeo doesn't shy away from the stereotype that women just make period jokes - launching wholeheartedly into an ongoing gag about the pill. Far more than just a punchline however, Matafeo's comedy is thoroughly feminist and she doesn't hold back in making jokes out of the gender politics of contraception. Yet her comedy is varied and we get everything from the pill to jokes about performing in her high school's musicals to characters she has created who lack self-confidence. She has a seemingly unlimited amount of energy; the show is pacy and never seems to lag.

Matafeo taps in to some serious stuff but the mood never darkens, she always finds a way to lighten the mood. She is also utterly relatable, spilling out frank truths and worrying that she is a bad feminist for contradicting her own beliefs. What is it like to be a feminist in 2017? She shows us as she begins preaching against Chris Brown while she can't help twerking away to his song. By the end of the show my cheeks hurt from smiling and, I clearly wasn't the only one - she exited the stage to howls and whistles, a sure sign of success. 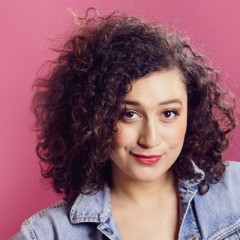